Virginie at The Wonderful World of Cinema and Emily at The Flapper Dame are hosting The 4th Wonderful Grace Kelly Blogathon to honour Grace Kelly, the icon of beauty and elegance. She was an outstanding actress, who worked most notably with Alfred Hitchcock (see Rear Window (1954) and To Catch a Thief (1955)). In Dial M for Murder, Kelly is Margot Wendice, the wealthy wife of an ex professional tennis player Tony Wendice, played by Ray Milland. She is to become the centre of the plot whereby the husband hires a hitman to kill the wife. Kelly’s character (that wonderful lady in red, and then in blue) comes off as a beautiful, brave and stoic woman who wants personal happiness, and would have stolen the show completely if not for the intricate, clever and psychologically-interesting plot, and the cunning personality of Tony Wendice, played brilliantly by Milland. 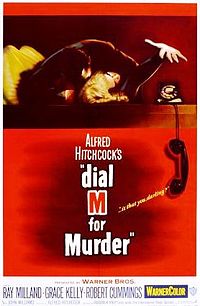 You know you are in for a treat when a film you are about to see is made by Alfred Hitchcock. This time around, the director is basing his film on a screenplay by Frederick Knott and is concerned with the proving of guilt, rather than with the usual “whodunit” mystery. Dial M for Murder starts with the blackmail and the deceit by the wife of her husband, but it ends in an unexpected area. The interesting thing about this film is that we know from the beginning who is the (attempted) murderer, and we follow every step to the conclusion, but we are still in for some surprises. Initially, that is because the murder of Margot, as planned by her husband Tony, does not exactly go according to plan.

Margot, Tony’s wife, and Mark Halliday, a murder-mystery writer, are a couple in love, and Margot starts to receive anonymous messages blackmailing her about the love letter from Mark which she kept in her bag and which got stolen. Tony invites an old school acquaintance Charles to his apartment to blackmail him in turn so that he murders his wife. This is so Tony inherits the money of Margot after her death (he already senses she wants to leave him). Charles dutifully arrives to carry out his evil deed at Wendice’s place of residence, but few things go according to plan. Hitchcock is interested in human psychology, in the motivations of killers and in the plotting of a perfect crime. Thus, special attention in the movie is paid to why Tony may want to kill his wife, why Margot may be interested in killing Charles (her alleged blackmailer), and what unseen, psychological game (or a contest of wits) may be going on between the killer and the detective. 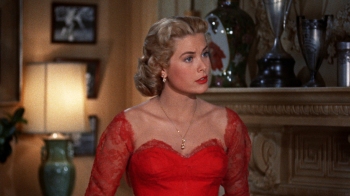 The attention to detail and camera-work are also exceptional in this movie. Everything in Dial M for Murder turns on those little details and objects, be it Margot’s little maroon-coloured bag, the keys to their house or the love letter. Tony himself is obsessed with the timing and little details of his own planned murder, telling Charles the precise time he will call home so that his wife may answer (and Charles may, at this point, start to murder her), and Tony is also obsessed with fingerprints, making sure that they are not traceable to either Charles or himself. The incredible thing about the film is that even when the twist is known, the plot does not stop with its surprises. Tony knows his plan to murder Margot failed, but he still manages to turn failures to his advantages. He starts to think quick on his feet, devising a plan B and carrying it out successfully (or so he initially thinks).

The film may not be strong on emotional investment or romance, and some characters are thinly drawn, but if we realise that the focus here was on a perfect crime committed in one single location, this is not such a big criticism for a film that primarily wants to show and underline the thinking processes of the killer and the detective. The characters that matter the most are drawn clearly. It is pure pleasure to watch Milland because he is so “deliciously dislikeable” in his role. He comes across as a ruthless psychopath that only thinks about personal gain, and the fact that in the end he wants some brandy and congratulates everyone on the job of discovering the attempted murderer just shows how little he cares about virtually everything in life. Then comes Inspector Hubbard to the scene, who is there “to solve” or rather understand the attempted murder committed. Williams, playing Hubbard, may be an imposing figure, but it is still a relief to find the character so unassuming and even self-deprecating. Inspector definitely tries to flatter Tony and pretends to go with his story (that is the way to treat egoistical characters like Tony), but Hubbard’s brilliant thinking also leads to him orchestrating the most intense and admirable traps for a criminal on screen.

Dial M for Murder may not be the best of Hitchcock’s creations, but the film has a clever, thought-provoking plot with tense moments, whose logical conclusion proves very satisfying upon watching and will please many fans of detective thrillers. The film also benefits from strong direction and acting work: Kelly is convincing as Margot, a woman who wants happiness and justice, Milland, as her husband, is the personification of cunningness and psychopathy, and John Williams, as Inspector Hubbard, is that grey-cells-working-fast detective who will make any ending of a detective story memorable.

Published by Spotlight on Film

Reviewing films since 2011. View all posts by Spotlight on Film

This site uses Akismet to reduce spam. Learn how your comment data is processed.

© Spotlight on Film, 2011- 2022. Unauthorized use and/or duplication of any textual material present on this website without express and written permission from this site’s author is strictly prohibited. Excerpts and links may be used, provided that full and clear credit is given to Spotlight on Film with appropriate and specific direction to the original content.