Speakeasy and Silver Screenings are presenting The Food in Film Blogathon, and I thought I must participate since food in films has always fascinated me. Food can be used for sensual purposes in a film, as in Como Agua Para Chocolate (1992), I Am Love (2009) or even in The Lunchbox (2013), or can have morbid connotations, as in Rope (1948), among other purposes and expressions. But, in many films, it seems to inexplicably connect main characters, and my choice of a film is exactly the one where food functions as such. In the Italian-language film Facing Windows, food does not play a leading role, but it does provide a point of connection between the main characters, becomes one of the components of a hidden passion, and symbolises the idea of remaining true to oneself, one’s origin and one’s beliefs. 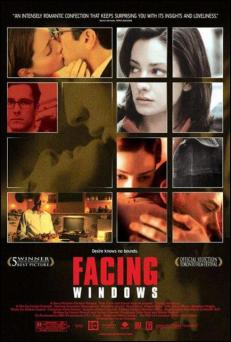 In this film, Giovanna (Giovanna Mezzogiorno) and her husband Filippo (Filippo Nigro) stumble upon an amnesiac man, Simone (Massimo Girotti), while out, and take him to their home. Simone only remembers a name “Simone” and a particular neighbourhood in Rome. While Giovanna gets entangled into Simone’s mysteries, she also becomes infatuated with the neighbour whose windows are just opposite hers, handsome bachelor Lorenzo (Raoul Bova), and the duo soon pursue the mystery behind Simone’s true identity together. Coming from Turkish director Ferzan Ozpetek, this film is a gem of the Italian-language cinema. It is an emotionally-moving, mystery-filled film, which also provides an in-depth character study. While the story here is interesting and poignant, the film is also beautifully presented, with aesthetically-pleasing shots and a very memorable, melancholy-inducing soundtrack, most of which is written by Andrea Guerra (Hotel Rwanda (2004)).

Facing Windows touches on many themes and issues, but forbidden passions, meaningful connections and coincidences, and the idea of staying true to oneself and one’s beliefs are at the forefront of this movie. The film attempts to provide a real insight into our heroine, Giovanna, who has a rocky relationship with her husband, while raising two small children. She is stuck with a meaningless-to-her job at a factory with long hours and little pay. Although the film does not work particularly well as a mystery, it does portray beautifully (for example, through flashbacks) the main character’s internal dilemmas, memories and “what-if” scenarios. Giovanna often gazes at the window in front of her own, which makes her wonder and dream of the fulfilment of one of her most shameful desires. Lingering glances at the window of her neighbour convey as much desire and despair as the loudest of cries, and the cinematography by Gianfilippo Corticelli works wonders to convey the situation.

Beautifully played by Giovanna Mezzogiorno, the character undergoes a personal metamorphosis when she gets physically closer to the handsome Lorenzo. The forbidden attraction between Lorenzo and Giovanna grows each day, and, because of Lorenzo and her daily changes in routine, Giovanna feels more and more liberated and braver to follow her own passion, which is baking. Now, it is to be noticed that Giovanna first makes her meaningful contact with Lorenzo when she brings her baked cakes to a restaurant, meaning that food does act as some sort of a connector between the two. In that meeting, at a local restaurant, Lorenzo points out to Giovanna that he often sees her at a restaurant when she brings her gateaux. Lorenzo knows of Giovanna’s interest in cooking, and a deep, well-meaning connection between the two is immediately established. The inexplicable thrill of Giovanna and Lorenzo’s seemingly doomed attraction, touched both by sadness and timidness, is partly what makes the film so good. Mezzogiorno and Bova’s chemistry is excellent, and their attraction seems genuine and believable. In fact, arguably, the best scenes in the film are the final ones, where Giovanna finally realises the true extent of her attachment to Lorenzo and wishes her feelings better known.

However, the tale of Giovanna and her infatuation with Lorenzo almost plays in the background of the main story here: the mystery behind Simone/Davide’s identity and the story he has to tell. This unfolds like a good psychological mystery drama with Giovanna and Lorenzo penetrating deep into Rome’s Jewish quarters to discover the identity of the frail old man. Interestingly, Giovanna, who, unlike Simone/Davide, never was a victim of the Holocaust, makes a deep connection with him. Giovanna recognises in Simone’s confusion regarding himself, his loss and his past forbidden passion –  herself, and her present situation. She empathises and sympathises with Simone, and discovers that the two has another thing in common: their love of baking. Also, Simone recognises his past passion for cooking and for his soul-mate in Giovanna’s internal struggles between her duty and her desire, and it is the delicious food and its production which help to make such a strong bond between Giovanna and Simone/Davide.

It is impossible to overstate the role which food, eating and cooking here play in introducing the characters to each other and cementing implicit friendships. For example, when Simone is introduced to Giovanna’s family for the first time, he is sitting at the table and is eating his soup. Giovanna and her two children are also dining. Simone starts eating his soup producing impolite slopping sounds, and the children are so amused that they begin to copy Simone’s behaviour, and, remarkably, he already feels like part of a family.  Here, it is worth to note that Massimo Girotti does an excellent job playing Simone, and it will be his final performance as he, sadly, passed away shortly after the film’s shooting.

In the end, the tale of Giovanna becomes a lesson of how to be strong in this world no matter the circumstances, remain true to oneself, and follow one’s dreams. The film also makes a special emphasis on the idea of a personal sacrifice made for the benefit and good of others. However, the main fault here is that, in its grand messages, the film almost forgets its intended audience and the focus of their attention. It may sound almost disrespectful to the character of Simone/Davide, but the film had been so preoccupied to establishing the “let-me-catch-my-breath” romance between Giovanna and Lorenzo, that any abrupt “switches” to Simone and his philosophical musings in the film later on become annoying at best, and the film never quite manages to successfully intertwine evenly the two main stories.

Romantic and philosophical, Facing Windows is a very good, gentle film with touching personal stories playing out to give voice to some broader themes, such as the Holocaust survivors’ movement and freedom of personal expression and belief. The film could have been less sentimental, and tried more to tie up together two parallel stories of Simone, and of Giovanna’s romantic connection with Lorenzo. However, as Facing Windows has enough mystery and history in its midst, its bittersweet nature and poignancy will appeal not only to those who enjoy slightly “over-indulgent” European cinema, but also to those who are into slow-moving and thought-provoking psychological dramas.

Published by Spotlight on Film

Reviewing films since 2011. View all posts by Spotlight on Film

This site uses Akismet to reduce spam. Learn how your comment data is processed.

© Spotlight on Film, 2011- 2022. Unauthorized use and/or duplication of any textual material present on this website without express and written permission from this site’s author is strictly prohibited. Excerpts and links may be used, provided that full and clear credit is given to Spotlight on Film with appropriate and specific direction to the original content.