What is it all about?

In 2011, it was announced that Tim Burton was working on his version of Notre-Dame de Paris with Josh Brolin, but the project never moved beyond the early stages. This film was supposed to be an adaptation of Victor Hugo’s 1831 novel Notre-Dame de Paris, which tells the story of three characters’ lives entangling against the backdrop of medieval Paris. Esmeralda, a beautiful girl who often dances in the square in front of the Notre-Dame Cathedral, has become the object of ardent passion on the part of three distinct men: severe Archdeacon Claude Frollo, the hunchback and bell-ringer of Notre-Dame, Quasimodo and dashing Captain Phoebus.

Why this project had the potential to be great?

As far back as 2013, I wrote a post where I talked about 10 classics I would love to see made into major films, and Victor Hugo’s novel was at the very top of my list. Tim Burton’s penchant for the unusual and the grotesque would have made this adaptation a dark, intriguing “feast for the eyes”, especially given all the recent advances in special effects technology which could render Quasimodo vividly and bring his world of old Paris and Cathedral-climbing to one magnificent spectacle. Tim Burton is great in establishing that “creepy fairy-tale” atmosphere (Sleepy Hollow (1999)) is one such example) that the film needs and he could have done the book justice. True, there were at least three other well-known cinematic adaptations of the book (in 1923, 1939 and in 1956), but, an “update” or a “remake” is desperately needed since the story is timeless and moving and, at least in my opinion, has such a big cinematic potential.

END_OF_DOCUMENT_TOKEN_TO_BE_REPLACED

Last week we saw the release of a tease trailer for the new film by David Fincher Mank (2020). This film is written by Fincher’s father Jack Fincher and is about “screenwriter Herman J. Mankiewicz and his battles with director Orson Welles over screenplay credit for Citizen Kane (1941)”. Films that portray other films, Hollywood or deal with film-making in general are curious since they provide an insight into their own industry. In this vein, we can recall Fellini’s ​8 1⁄2 (1963), Tornatore’s Cinema Paradiso (1988), Hazanavicius’s The Artist (2011), Hancock’s Saving Mr. Banks (2013), Coen brothers’ Hail, Caesar! (2016), and, more recently, Tarantino’s Once Upon a Time in Hollywood (2019). In the list below, I am focusing on 5 similarly-themed films that usually escape this categorisation on the Internet. In no particular order:

This film showcases Judy Garland’s phenomenal acting ability. In this story, Esther Blodgett (Garland), later, Vicki Lester, finds her desired career of a singing actress skyrocketing after she meets already almost forgotten, disillusioned and alcoholic movie star Norman Maine (James Mason). The film by George Cukor (The Philadelphia Story (1940)) clearly demonstrates the pitfalls and disillusionments associated with wanting and trying to be an actress in a movie industry, as Blodgett/Lester tries to navigate tricky behind-the-scenes action and movie studios’ unscrupulous management, being torn between hope and despair, love and hate.

END_OF_DOCUMENT_TOKEN_TO_BE_REPLACED 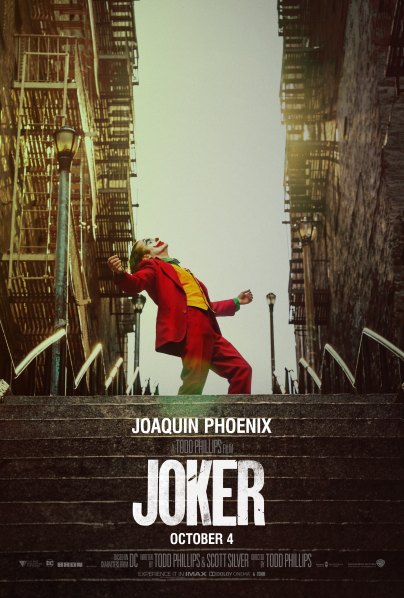 Directed by Todd Phillips (The Hangover (2011)), Joker is a latest, much-hyped film starring Joaquin Phoenix (The Master (2012)) in the titular role of Arthur Fleck or Joker, a stand-up comedian fallen on hard times, who resorts to violence in Gotham City to avenge wrongs allegedly committed against him. Being supported by no other than Robert De Niro (a role reversal from The King of Comedy (1983)), Joaquin Phoenix gives the performance in Joker than can only be described as manically jaw-dropping in its brilliance. The character insight and portrayal are also bold, vivid, without holding anything back, as the film tries to explore the origins of Arthur’s homicidal tendencies through his early history and its revelations. However, unfortunately, if we then shift our attention to anything that is not Phoenix or the character study, we can see a number of problems in the film, including the inability to suspend disbelief regarding major plot developments, the sheer predictability of the plot, and the imbalance in the spotlight given to the minor characters vis-a-vis the main one.

END_OF_DOCUMENT_TOKEN_TO_BE_REPLACED

“This is not the sort of film you “like” or “don’t like”. It’s a film that you experience – and then live with” (Matt Zoller Seitz).

“…wandering here over the desolate mountains – what an absurd situation!…I knew well, of course, that the greatest sin against God was despair; but the silence of God was something I could not fathom” (Rodrigues [Endo: 90]).

Martin Scorsese’s 28-years’ “passion” project culminated in the film Silence, based on the acclaimed novel by Shūsaku Endō. The film is about two 17th century Portuguese Catholic priests Father Rodrigues (Andrew Garfield) and Father Garupe (Adam Driver), who decide to travel to Japan in search of their former mentor, Father Ferreira (Liam Neeson), who, most believe, betrayed his holy cause in the foreign land. Touching delicate moral and religious issues, the film is powerful both in its vision and in its message, achieving its desired cinematographic goal to awe, thanks to Scorsese’s dedicated and masterful direction, breath-taking cinematography and inspiring original material. Although the plot is uncomplicated and could even be considered “thin”, underneath every action and thought of the main character lies (and could be sensed) a myriad of contradictory emotions; culturally-divisive inner turmoil; and dormant causes for the later spiritual/religious re-awakening.

END_OF_DOCUMENT_TOKEN_TO_BE_REPLACED

“When I was your age, they would say we can become cops, or criminals. Today, what I’m saying to you is this: when you’re facing a loaded gun, what’s the difference?” (Frank Costello)

Martin Scorsese’s crime thriller The Departed, winner of an Academy Award for Best Picture in 2006, is considered to be the director’s finest take on the mob theme since Goodfellas (1990) (intermittently he also directed Casino (1995) and Gangs of New York (2002)). With many great actors involved in this film, and with such a meticulously constructed script, this is no wonder. The Departed is set in the south of Boston during the time when the police wages their war against the Irish-American criminal syndicate. The film starts off with young Colin Sullivan (Matt Damon) befriending the untouchable lord of crime, Frank Costello (Jack Nicholson). Years later, there emerge two cops: one – Colin Sullivan, only too ready to infiltrate the state police as an informer for Frank Costello, and another Billy Costigan (Leonardo DiCaprio), a guy who grew up in a criminal environment, who becomes a gang member working for Costello, while at the same time working as an undercover cop. When both the state police and the mob begin to suspect that there is an informer within their circle working for the other side, both Sullivan and Costigan must race against time to uncover the identity of another to save their lives.